Stranger Things Season 3 is all set to come out on Netflix in 2019. The third season of this popular thriller is among one of the most awaited shows of the year. The show is created by the Duffer Brothers and is based in a quaint, fictional town of Hawkins in Indiana. As expected, Stranger Things Season 3 will take the story of seasons 1 and 2 forward.

Let us take a closer look at the release date, cast and plot of the show:

The release date of the show has officially been announced by Netflix. Stranger Things Season 3 release date is the 4th of July. The show will return on Netflix around the holiday-season. Hence, this will give the viewers ample time to binge watch all eight episodes at one go!

Max, introduced in last season is likely to play a bigger role in Season 3. Moreover, we also have newer characters such as Max’s brother Billy.

In addition to that, the relationship between Joyce and Jim Hopper may also be a focus this season. All our favourite actors from the show are likely to make a return. However, the character of Bob is unlikely to be present as he died in the previous season. 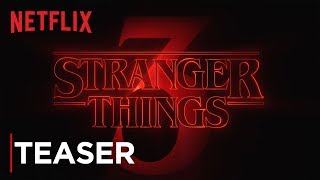