Spider-Man 3 movie after the recent Sony-Marvel deal will start filming this Summer and the leaked locations have revealed a lot of spoilers filled details about the plot and villains. Jon Watts is once again hired as the director for the third chapter in Spider-man trilogy and the shooting will run from July to around November this year.

Production on ‘Spider-Man 3’ will reportedly run from July to November and film in Atlanta, New York City, Los Angeles, and Iceland 🕷

The filming locations for Spider-man 3 include cities namely Atlanta, New York, Los Angeles, and Iceland. The last city Iceland is rumored to feature Kraven The Hunter and could be his home based on the greenery and natural regions. There are rumors that Spider-man 3 will adapt part of Kraven: The Last Hunt and the villain will be hunting Spidey in the movie.

Spider-Man 3 Leaks and Spoilers for Kraven The Hunter

Jon Watts always wanted to use Kraven for Spider-man movie and it was just difficult to adopt such a character on the big screen. But with events of Spider-Man: Far From Home, Peter Parker is a wanted man for the murder of Quentin Beck/Mysterio and his secret identity is revealed to the world.

It could be a perfect opportunity to use Kraven in the third Spider-man movie where he is morally right in hid mind about hunting Spidey. Some of the leaks claim Chameleon will cause more trouble while pretending to be Peter Parker/Spider-man and it is when Kraven the Hunter will get involved, who could be related to Chameleon as his step-brother or something.

Sony Pictures are also developing a standalone Kraven: The Hunter movie and they are planning to have a Spider-man cameo in the film. While the common fans are unaware of the Sony-Marvel deal over Spider-man rights usage, it seems Sony has allowed Marvel to create Spider-man 3 and include the character in future Avengers movies.

But in return have asked in return that Tom Holland and other characters from his movies will feature in their Sinister Six movies. It is why Michael Keaton’s Vulture was seen in the Morbius trailer, Tom Holland’s cameo in Venom 2 is also rumored and the same can happen with Kraven and other sinister six characters. 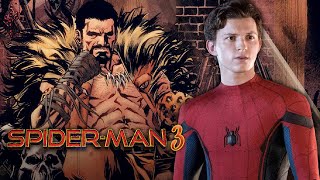