Samsung Galaxy S11 will release in about three months and hence the news, leaks, rumors and all sorts of information about the smartphone are coming out. There could be different variants of the Galaxy S11 such as faster Galaxy S11, bigger Galaxy S11+ and even a Galaxy S11 Pro.

For those waiting on the latest Samsung flagship device, here is everything you need to know about the specs, cameras, price, features, design, release date, etc. for the upcoming Samsung Galaxy S11 device.

Samsung Galaxy S11 leaks say that it will be called as “Picasso” in codename as the Galaxy S10 was dubbed as “Da Vinci”. Picasso is always related to art and it means the Galaxy S11 will be a beautiful piece of machinery. There will be three screen sizes in the next Galaxy model of 6.4-inch, 6.7-inch, and 6.9-inch. While the smaller variants will have 5G and LTE options, the larger one will have the only 5G network option.

The camera area of the Galaxy S11 + is very large very large, and the camera is also very strong very strong. pic.twitter.com/4BwNP1ATol

I hope that the Galaxy S11 all over the world uses the Snapdragon 865 processor. Exynos 990 cannot compete with it. This is the darkest period of Exynos. It has never been so embarrassing.

The latest Snapdragon 865 from Qualcomm will be used in the Galaxy S11 and the whole screen will act as a fingerprint sensor. The other rumors talk about a 108 MP camera sensor, 8K video recording and even secondary display on the side or back on the device.

Samsung Galaxy S11 could be one of the most expensive smartphones from the company, but at the same time, they would introduce a budget variant to boost the sale and so that everyone could afford it. Here are the expected prices for every Galaxy S11 variant. 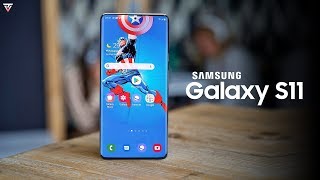