Rami Malek has won himself the Best Actor award at this year’s Golden Globes for his incredible role of late Queen frontman Freddie Mercury in Bohemian Rhapsody.

Malek beat nominees like Bradley Cooper (A Star is Born), Lucas Hedges (Boy Erased), Willem Dafoe (At Eternity’s Gate), and John David Washington (BlacKkKlansman) for the Best Performance by an Actor in a Movie- Drama award.

“I am beyond moved,” he said when he accepted the award, also thanking Freddie Mercury, adding: “This is for and because of you, gorgeous.”

To get into the role, in addition to the fact that Malek got himself a lot of phony front teeth (revealing to Vanity Fair that they took some time becoming accustomed to). Malek also saw Mercury’s 1985 Live Aid Performance more than multiple times on YouTube to get the scene completely spot-on.

Malek totally nailed it; each hand motion, step, head movement and even the lipsing coordinates perfectly with Mercury’s amid the sequence. To be completely honest, he could have won the Golden Globe for this reason alone.

Malek walked the red carpet earlier tonight with Queen guitarist Brian May, who also sat nearby Malek through the function – and has been praising the actor for the splendid portrayal.

A couple of months back, May stood up to state Malek deserves an Oscar for his amazing execution as Mercury, telling the Press Association:

“He’s incredible… without a doubt he’ll be on the nominations list for an Oscar – and well deserved as well.”

The 71-year-old musician added: “He inhabited Freddie to the point where we even started to think of him as Freddie. Really remarkable.”

Rami Malek and the cast for Bohemian Rhapsody

“We’ve lived with this project for nine years and it’s incredible to see it doing so well. It came out to shitty reviews, as some of our work has before, but the public has embraced it magnificently,” May added.

“Everybody gave 200 percent, from the actors and technicians to the production team and hair and make-up, everyone. You don’t get any lukewarm responses. The guy who plays me should be getting awards all over.”

Most likely Malek’s Golden Globe win will be one of many to come! 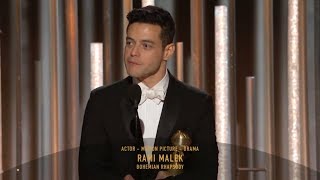