Patriots vs Giants Thursday Night football game will be a high octane race even though both the teams are at a different pace. The New England Patriots have won all five of their NFL 2019 season games and have high odds for winning the Super Bowl title. While the New York Giants are suffering through a lot and still managed to make a comeback after winning two continuous games.

Daniel Jones was promoted to the opening position and Eli Manning was benched as the leading quarterback which changed the fate of the Giants. The weather reports says that there will be harsh winds and add the injured players to that, the Patriots vs Giants game would become a lot more interesting.

Patriots are Adapted to Playing in Aggressive Weather

The Patriots are no stranger to harsh weather conditions and heavy winds while playing football. In fact, they are so adapted to it, that they use the weather as an advantage against their opponents. It is expected that the weather will be very bad and winds will be blowing at a speed more than 20 mph in the Patriots vs NY Giants game.

New England Patriots are at a 29-4 record in NFL games with such strong winds. At the same time, Tom Brady is 8-o whenever he just has 3 days to practice and plays in the Thursday night football. The Giants are already the weaker team and such odds have made it much more difficult for them to secure a victory in Week 6 of 2019 NFL season.

Giants have a lot of Injured Players

New York Giants were looking strong in the game against the Tampa Bay Buccaneers and somehow managed a win with one point but unfortunately their wide receiver Saquon Barkley was injured in that game. After that, things have not been in the favor of the NY Giants as Evan Ingram, Sterling Shepherd, and Wayne Gallman are also out in the Patriots vs Giants game.

Saquon Barkley, Evan Engram, Sterling Shepard, and Wayne Gallman will all be out for the Giants tomorrow against the Patriots https://t.co/FCzGQKwUoG pic.twitter.com/wHOTPbzQiY

But the Giants will still give a tough fight with Daniel Jones opening for them in the Thursday night football. Even the Patriots have their share of injured players which includes Philip Dorsett and others are still not sure. One must not forget the Super Bowl final between Patriots and Giants a few years ago as the Giants are the only team that has defeated them so easily. 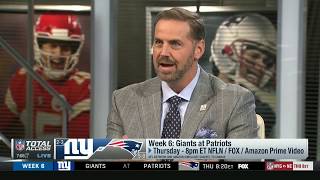