OnePlus 8 and OnePlus 8 Pro are the most talked about smartphones of 2020 and their release dates are just a few days away. OnePlus will launch the next generation of their smartphones in the next two to three months and it will be competing against the big brands such as Samsung and Apple.

I just want a @oneplus 8 Pro. Then I’ll be happy. And then I won’t buy anything else I promise. 😇

It is why OnePlus 8 will have 5G support from Verizon and other major carriers to capture the US market. There are also rumors that OnePlus 8 will have a budget variant called OnePlus 8 Lite for the mass-market and common users. Here is everything we know about the OnePlus 8/8 Pro/8 Lite release date, specs, camera Features, price rumors and more.

OnePlus 8, One Plus 8 Pro and OnePlus 8 Lite Variants

OnePlus 8 could follow the strategy of Samsung Galaxy devices and launch three variants of the upcoming smartphones. There will be the regular OnePlus 8, a bigger model with powerful specs as OnePlus 8 Pro and the more affordable variant OnePlus 8 Lite. It would make sense for the makers to have multiple options given how every user has different needs and budgets.

OnePlus 8 Pro will have quad rear cameras with 60MP main, 16MP Telephoto, 13MP wide-angle cameras and a fourth 5-10 X telephoto wide-angle camera lens with 3D ToF and laser focus features. The front camera will be a 30MP selfie-cam with a punched-in screen hole instead of a pop-up setup and the regular OnePlus 8 might only have triple-rear cameras.

OnePlus 8 series phones could have an earlier release date compared to previous models as they are directly competing against the Samsung Galaxy S11 smartphones. While the OnePlus 7 came out in May 2019, the new lineup of devices could be launched at the OnePlus 8 launch event at the end of March 2020 including OnePlus 8, 8 Pro and 8 Lite following a public release date in next month of April. Here are the rumored prices for all the upcoming OnePlus 8 smartphones. 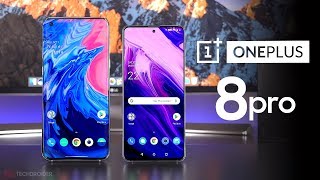