OnePlus 8 series will be launched in the next few months and everyone is excited about what the flagship killer has in stores now. Among the three upcoming variants, OnePlus 8 Pro will be the biggest and best, with the most upgraded specs. There are a few leaked renders of OnePlus 8 Pro showing the new camera upgrades and improved specs. Here is more information on OnePlus 8 Pro camera setup, specs, release date and the impact of coronavirus outbreak on the OnePlus launch event.

OnePlus 8 Pro leaked images show the old CAD renders of the smartphone and the camera setup. As per one of the Twitter leaks, OnePlus 8 Pro will have three rear cameras in a vertical center lineup. The flash is placed below the camera setup and there is also a 3D Time of Flight (ToF) unit on the left side of the main cameras. The device shown in the leaked images is wrapped inside some sort of protective sleeves which makes it harder to determine the exact color of OnePlus 8 Pro’s back panel.

OnePlus team has already shared that they will improve the videography experience of their upcoming and existing smartphones. Zake Z, Image Product Manager of OnePlus wrote that they will bring the support for stabilization in 4K recording mode, along with less noise and better lightning. We can expect the OnePlus 8 Pro camera to have a hardware and software upgrade on autofocus.

OnePlus 8 launch event is reported to be deeply affected by the Coronavirus outbreak and many rumors claim that it will be canceled in China. It is also said that OnePlus will cancel all their offline launch events and shift to online events. However, the company has denied such rumors and issued an official statement debunking the false reports. OnePlus 8 Pro, OnePlus 8, and OnePlus 8 Lite will be launched at series of online and offline events globally, as per the planned schedule. 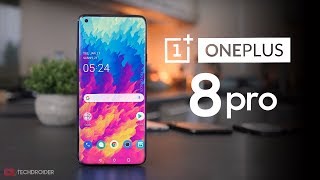