One Punch Man Season 3 plot will continue the Saitama vs Garou fight as it was left open-ended during the final episode. But that doesn’t mean that the Caped Baldy won’t be facing more enemies and even some of the older villains will also return. One of the most interesting characters that Saitama has ever faced is Speed-O-Sound Sonic or just simply Sonic in the first two seasons of One Punch Man anime series.

There are predictions based on the One Punch Man manga chapters that Sonic will feature again in the next anime installment. Saitama vs Sonic fight will happen in “One Punch Man” Season 3 and here is more information on the release date, plot and manga spoilers.

One Punch Man Season 3 will bring back Speed-O-Sonic as one of the nemesis for Saitama. Sonic has been a great character in One Punch Man series and despite being a villain, he has fought several monsters and saved people many times. The reason why Sonic is an anti-hero and special is that he knows how strong Saitama really is and still proceeds to fight him.

In my opinion the writing that goes into One Punch Man is severely overlooked despite it having alot of incredible and nuanced characters and so many heartfelt moments pic.twitter.com/zbfbxvmLDM

Speed-O-Sound Sonic vs Caped Baldy will be one of the most amazing fights in “One Punch Man” Season 3. As per One Punch Man manga chapters that will cover the season 3 of the show, Sonic will be a part of the storyline. Sonic uses his super-speed to attack Saitama but he defeats him easily and doesn’t even know they have a rivalry going on.

One Punch Man Season 3 release date is yet not announced even though it will be more than a year since the second season ended. Despite the animation studio controversy, the series will most likely be renewed for a third season. There are a few reports that claim “One Punch Man” Season 3 could come out in 2020 but it looks almost impossible. Even if they start production on the show now, the third season of One Punch Man won’t be out until 2021. 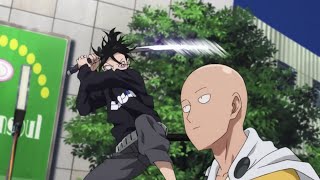