One Piece is one of the most famous manga in the world which has broken so many records including the Guinness World Record for the most copies published for a single comic book author. There are 80+ volumes releases for One Piece manga till now and it has a fan following all over the world. Eiichiro Oda, the creator of One Piece manga has sold over 430 million copies and has topped the manga sales chart for many years.

'One Piece' creator says the end is 'near' for the manga, and if fans guess what his ending is he'll change it 🙃

But One Piece can’t continue forever and has to end at one point. Oda has hinted on when One Piece ending will happen and there are so many theories on how it will end and what will be the final reveal, last scene of the One Piece manga story?

One Piece manga has been kind of hinted to run for 100 volumes by Oda and based on that, there is still time for the manga to end. Each volume consists of around 10 chapters average and currently, Volume 95 is running. It indicates that One Piece ending is just 5 volumes away which will take maximum around a year or two.

But again there are so many plot points and mysteries left to conclude, that the last few volumes could have way more chapters. There are already around 970 chapters out for One Piece and it will easily have more than 1000 chapters for sure. One Piece ending chapter release date could happen around late 2021 or early 2022 as per some of the theories.

One Piece ending theories are countless and each of them predicts a different ending to Luffy and the Straw Hat Pirates. Although, the common theory is that Luffy will find the ‘One Piece’ treasure and do something for the pirates community so that the world government doesn’t hunt them down.

One of the most popular One Piece theories predicts that Luffy will pass on his legacy to his son and make sure he makes the future world a better place for the upcoming generations. Luffy will become the new Pirate king and start a voyage to the unknown corners on the sea and discover other treasures. 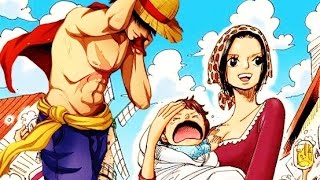