One Piece Chapter 975 will make things interesting as the manga is once again back in action. Luffy has reformed his alliance with Kid and Law and they will attack the Orochi and Kaido’s beast pirates. Fans were so excited to see Luffy at the end of the last One Piece chapter after it was revealed that Kanjuro is the traitor. One Piece 975 will show the big naval battle of Straw Hats Pirates vs Beast Pirates.

Denjiro and Hiyori might also return in “One Piece” Chapter 975 and will be crucial to the storyline and might save Momonosuke who has been kidnapped by Kanjuro as he is delivering the son of Oden to Orochi. Here are more details on One Piece Chapter 975 release date, spoilers, predictions, raw scans leaks and how to read online the manga chapters.

One Piece Chapter 975 Spoilers: Kanjuro will take Momonosuke to Orochi

One Piece Chapter 975 will follow through after the reveal that Kanjiro was the traitor all along in the Scabbards and have been sending information to Orochi. It was explained that Kanjuro was obsessed with acting and he wanted to become another person even if that led to his death. The biggest revelation was that real Kanjuro never left the shore and use a devil fruit to make his fake copy and took Momonsouke with him.

The Scabbards were then attacked by the Beast Pirates and all hope was lost but Luffy arrived at the right time and saved the day. One Piece 975 manga chapter will show that the Thousand Sunny ship survived the bombings from the Beast Pirates and Luffy also brought new allies in the form of Eustass “Captain” Kid and his team of Pirates. Fans are looking forward to a huge naval battle between the joined forces of Luffy, Law and Kid against Kaido’s soldiers in “One Piece” Chapter 975.

Kanjuro has kidnapped Momonosuke and is taking him to Orochi, the Scabbards are trying their best to stop him. Denjiro and Hiyori who are the mole in Orochi’s kingdom might save Momo in One Piece Chapter 975 as they have waited 20 years for the right opportunity.

One Piece Chapter 975 will release in manga stores on Sunday, March 22, 2020 as there will be no more hiatus. However, the raw scans for the manga will be leaked online 2-3 days prior on the internet around March 20 and fans will start discussing the spoilers of One Piece 975 over Reddit and other social media platforms.

One Piece, Ch. 974: The great flashback has ended and the story zooms to the current timeline! Read it FREE from the official source! https://t.co/rYO9vjKyS2 pic.twitter.com/2m76RHrUfj

Although, it would be better to wait for the official release of One Piece chapter 975 English version. One Piece manga chapters can be read for free on VIZ media and Shueisha’s Shonen Jump and Mangaplus official websites and platforms, and this would also help the manga creators. 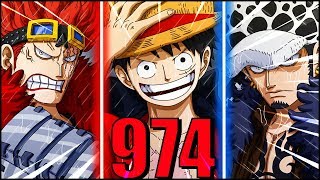