One Piece Chapter 974 raw scans are leaked on the internet and they contain a lot of spoilers. The manga storyline takes place in the present timeline and there are no more flashbacks for Oden or anyone else. The long-awaited traitor identity is also revealed in One Piece 974 manga chapter.

Luffy, Law, and Kid head to Onigashima and attack Kaido’s ship. Denjiro and Komurasakt will also play an important role in “One Piece” Chapter 974 as all the secret identities are now revealed. Here are more details on One Piece Chapter 974 release date delay, spoilers, predictions, raw scans leaks and how to read online the manga chapters.

One Piece Chapter 974 spoilers reveal that Kanjuro was the traitor all along in the Nine Red Scabbards team. Kanjuro explains that he was always searching for a place to die but he never intended to hurt any of them. Orochi was his master all along and he just wanted to feed him information as per the leaked images of One Piece 974.

Kaido and Orochi will come to know that the Scabbards have time-traveled and are not dead, and the beast wants to capture them alive. Denjiro is also revealed as Kyoshiro and “One Piece” Chapter 974 will show that he wants to separate Komurasaki from Orochi with death. Kanjuro kidnaps Momonosuke at the end of One Piece 974 and Kid will save the Scabbards.

One Piece Chapter 974 will release in manga stores on Sunday, March 15, 2020 as there will be no more hiatus. However, the raw scans for the manga are already leaked online on the internet and fans have started discussing the spoilers of One Piece 974 over Reddit and other social media platforms.

One Piece, Ch. 973: Legends come to life as more history is revealed in the great flashback! Read it FREE from the official source! https://t.co/qbXk6KwQ9P pic.twitter.com/kulhsVNCEr

Although, it would be better to wait for the official release of One Piece chapter 974 English version. One Piece manga chapters can be read for free on VIZ media and Shueisha’s Shonen Jump and Mangaplus official websites and platforms, and this would also help the manga creators. 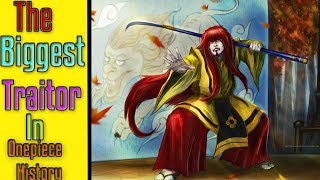