One Piece Chapter 973 release date has been delayed by one week and the manga won’t come out this weekend. It makes sense as Oda would want a hiatus as the flashbacks from Wano arc are over and the One Piece 973 will resume the present timeline of Luffy and rest of the straw hats.

The current timeline will start after Oden’s confirmed death and the mystery of the rebel ship disappearing will also be solved. Here are more details on One Piece Chapter 973 release date delay, spoilers, predictions, raw scans leaks and how to read online the manga chapters.

One Piece Chapter 973 Spoilers: The Rebels are Lost and Traitor Revealed

One Piece Chapter 973 story will resume from the point where the rebels ship was lost in the middle of the sea when they were about to meet Luffy. As per Oden’s death wish, Toki sent Kinemon, Kiku, Raizo, Kanjuro and Momo, 20 years into the future where they are currently standing at the shore waiting for the rebel ships.

Luffy and Zoro are preparing for their raid in “One Piece” Chapter 973 but Kinemon won’t be able to meet them at Onigashima if the rebels don’t arrive in time. One Piece 973 plot predictions and spoilers also hint that Toki might also teleport to the future to see whether the Scabbards have found the warrior destined to beat Kaido and the traitor of Wano will also be revealed.

One Piece Chapter 973 has been delayed for a week and will now release in manga stores on Sunday, March 8, 2020. However, the raw scans for the manga will leak online 2-3 days before and fans will start discussing the spoilers of One Piece 973 over Reddit and other social media platforms around March 6. 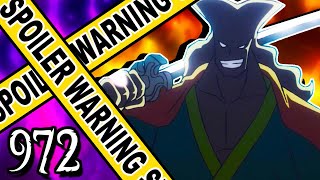