One Piece Chapter 971 will show Oden saving the Nine Red Scabbards with the help of Toki and teleporting everyone into the future. Oden will sacrifice his own life so that others can escape Kaido and will have a second battle against the beast. Everyone knows that Oden will be executed and Kozuki Castle will be burned in One Piece 971 but there has to be a mysterious traitor to make it all possible.

The latest One Piece manga chapter 971 speculations are predicting that Kanjuro could be the spy in Oden’s team that switches sides to Kaido during the final battle. Here is everything you need to know about One Piece Chapter 971 release date, spoilers, theories leaks, raw scans and how to read online the manga chapters.

One Piece Chapter 971 Plot Spoilers: Is Kanjuro the Traitor from Oden’s Side?

One Piece Chapter 971 plot will clear the doubt that none of the members from Nine Red Scabbards is a traitor as they fought bravely alongside Oden in the battle against Kaido. Although, there are various hints in the previous chapters of the manga, and One Piece 971 would be disappointing if the traitor reveal was just a red herring. The flashback to Oden’s arc is coming to end in chapter 971 of One Piece and it means that the traitor has to be revealed.

Most of the readers believe that Kanjuro is the real spy and he was the main reason why the alliance’s attack of Onigashima failed as some traitor provided information to the enemies. Further, Kanjuro was not surrendered to Orochi and Kaido and neither did he received any heavy punishment. It will be revealed in One Piece Chapter 971 that Kanjuro didn’t receive any harm because he switched sides from Oden to Kaido during the final moments of the battle.

One Piece Chapter 971 will not release this week as the manga is on a hiatus for the next Sunday. One Piece 971 manga chapter will now come out in stores on Sunday, February 16, 2020. However, the raw scans could be leaked online two to three days prior and fans can catch glimpse of One Piece 971 over the internet around February 14.

Although, it would be better to wait for the official release of One Piece chapter 970 as it can be read for free on VIZ media and Shueisha’s Shonen Jump Mangaplus official websites and platforms, and this would also help the manga creators. 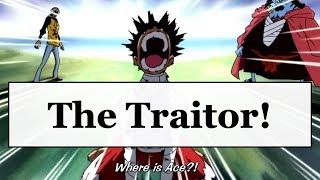