One Piece Chapter 971 spoilers are already leaked on the internet as the Japanese manga raw scans are out online. It reveals a lot of interesting details about Oden’s execution, Orochi and Kaido’s betrayal and the future of Nine Red Scabbards. Fans will agree that Oden is the most badass character in the manga after reading One Piece 971 pages. Here are more details on One Piece Chapter 971 plot leaks and spoilers showing how Oden will get boiled alive to save the Scabbards and people of Wano.

One Piece Chapter 971 Leaks and Spoilers

One Piece Chapter 971 raw scans show that Oden will agree to get boiled alive in a pot of hot oil on a condition that if he can endure it for one hour, Kadio will let the Nine Red Scabbards and his other companions go free. Orochi, however, tries to interfere and make the Scabbards stand over the pot cover, but Oden is so strong that he carries them while getting burned alive.

One Piece 971 manga chapter also reveals the reason behind Oden dancing naked in the streets of Wano. Every time Oden danced naked on the streets, the lives of 100 people will be spared and hence he kept doing that for 5 years. The traitor has not been found in chapter 971 meaning the flashback can continue for another chapter and there are a few fans who predict that Oden may be still alive.

One Piece Chapter 971 will release in manga stores on Sunday, February 16, 2020. However, the raw scans for the manga have already leaked online and fans are discussing the spoilers of One Piece 971 over Reddit and other social media platform.

Although, it would be better to wait for the official release of One Piece chapter 971 English version. One Piece Chapter 971 English translation can be read for free on VIZ media and Shueisha’s Shonen Jump Mangaplus official websites and platforms, and this would also help the manga creators. 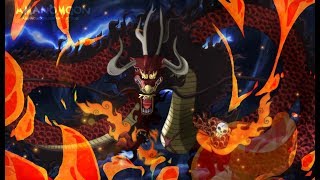