One Piece Chapter 969 release date is very near and with it, a lot of plot spoilers and leaks are coming out for the manga. The chapter will finally end the flashbacks storyline of Oden and Roger where both are executed after finding out the one piece treasure. Luffy who is the main character of the manga along the Straw Hat Pirates might return at the end of One Piece chapter 969 as the story returns to the present timeline.

BRO THESE SPOILERS FOR ONE PIECE!!!!! 969 pic.twitter.com/GrNPQjOeQM

Fans might also finally get to see the famous execution scene of World Government executing Roger pirate and him revealing about the one piece treasure to the world. Also, Oden will fight for revenge against Kaido and Orochi and here are more details on One Piece Chapter 969 plot leaks and spoilers.

Roger Executed by World Government and One Piece Treasure

One Piece 969 will finally show the backstory of the opening scene where Roger pirate is getting a death sentence by the government. Roger smiles at his death and tells everyone that whoever finds his one piece treasure can claim ownership to it.

Roger disbanded his crew of pirates after learning that every pirate group is behind them and wants to steal the one piece treasure. He was already going to die due to an unstoppable disease and hence decided to get executed in front of the world and declare about the open challenge of finding one piece treasure to everyone. One Piece Chapter 969 will be the last time readers will be seeing Roger as the story returns to its original timeline.

Oden is back in Wano after serving Roger and helping him discover the one piece treasure but he will be shocked to see that the country in overruled by Orochi with the help of Kaido in One Piece Chapter 969. There is no way he will stay silent and declare war against Orochi and the famous Oden vs Kaido fight will happen.

While everyone knows that Oden dies at the hands of Kaido, but the details of how he is defeated are yet unknown and will be revealed in the next chapter of the manga. One Piece chapter 969 will release on Sunday, January 26 and the raw scans are already leaked on January 23 on the internet. 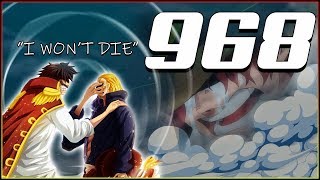