One Piece Chapter 968 is still not out even after half of January 2020 has passed as it was delayed due to the holidays. But now that the release date is around the corner, spoilers and raw scans leaks for the published pages are coming out. The latest One Piece chapter will continue with Oden’s journey with Roger Pirate and their adventures together. Whitebeard allowed Oden to travel with Gol D. Roger after he promised to join them later.

The manga readers are looking forward to One Piece Chapter 968 so that they can know what happens to Straw Hat Pirates after they disappeared before meeting their allies and join forces for the Onigashima battle. There are also chances that One Piece story returns to present times after Oden’s backstory is done, and fans will get to know what happens to Luffy and other pirates after they disappeared.

One Piece Chapter 968 Plot: Oden on a New Journey

Roger and Oden and travel together on his ship and finds out new poneglyphs on the Fishman island. But Oden’s wife Toki got sick and she was sent back to Wano country, Oden wanted to accompany her but she told him to stay with Roger and continue his journey.

One Piece Chapter 968 will also show Oden and Roger traveling to the last island and finding the legendary one piece treasure. There are some other spoilers for One Piece 968 indicating that Wano will become an open country and also the truth about ‘The Voyage Century’ will be revealed. Roger is aware of everything and he also knows about the mysteries of one piece treasure.

One Piece Chapter 968 Spoilers: Oden vs Orochi and Future of Wano

One Piece Chapter 968 will also show rivalry between Oden Kozuki and Kurozomi Orochi in the Wano Country. It is known that Orochi doesn’t want Oden to be a shogun and lead the village, so there will be a lot of tension among them along with a possible battle.

Orochi with the help of Kaidou will try to stop Oden from reclaiming his throne but he will fail. Chapter 968 of One Piece will also show Oden opening the borders of Wano and the reason for that will also will be revealed. One Piece Chapter 968 will release on January 20, 2020, and the raw scans will be available online from January 17. 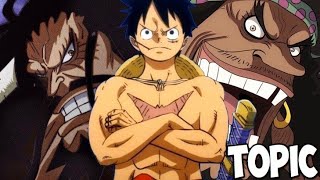