NFL Week 1 is the main deciding factor for the 2019 season which will set up how the rest of games will go. Every team will finally get a chance to test out their new roster before the battle gets intense for making it to the playoffs. All the 32 teams will take part in the Week 1 game and it is the ultimate opener of this season. Here are the NFL predictions and picks for Rams vs Panthers, Chiefs vs Jaguars, Steelers vs Patriots, Giants vs Cowboys.

Jared Goff is ready to take the Los Angeles Rams to another Super Bowl and win it this time. Rams coach Sean McVay and Goff have a good thing going and the quarterback is performing great under his guidance. Even Cam Newton from Carolina Panther remembers the 2015 Super Bowl where he won the MVP title in the finals. The Rams would most likely open the season with a victory against the Panthers.

Compensation update: Rams are giving QB Jared Goff a four-year, $134 million extension that includes an NFL-record $110 million guaranteed, per source. It ties him to LA through 2024 season.

The Jaguars has got John DeFilippo as their offensive coordinator to boost up the offensive side of the team. Even though the Jags have a strong defense, it will be up for a test when Patrick Mahomes from Chiefs starts his attack on it. The reigning MVP might struggle a bit as their running back situation is not clear. Still, Mahomes threw 50 touchdowns passes in his starting year and the Chiefs can beat the Jaguars in a tough battle.

The Patriots are ruling the NFL game since the last few years with Tom Brady and Rob Gronkowski as their lead commanders. Even though Gronkowski retired recently due to his body injuries, Brady is still going strong at 42. The Steelers can give them a tough fight but they will be missing out Antonio Brown and Le’Veon Bell.  It may level the field a bit but Brady and Patriots are too hard to defeat.

Tom Brady vs the Steelers In Foxboro

The Cowboys finally managed to strike a new deal with their star running back Ezekiel Elliot and things are looking good for them. Eli Manning will be the leading quarterback for Giants which makes it further interesting. Dak Prescott is glad that Zeke is back in the team and the Cowboys now boasts a solid offensive line. The game would be much more interesting as all eyes will be on Ezekiel Elliot as whether he plays in the Week 1 or wait till the playoffs. 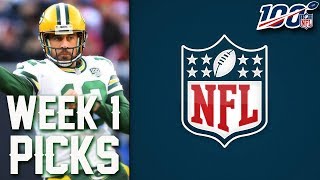