AFC North division is one of the most interesting sides in the NFL as all the top three teams are equal and anyone could win the division title. Cleveland Browns, Baltimore Ravens, and the Pittsburgh Steelers are on a very closed-call race to lead the points table in AFC North side. Browns and Ravens are currently at the top with 2-2 record and the Steelers are just behind at the third spot with 1-3 record.

The Cincinnati Bengals, as usual, are at the bottom rank with 0-4 and would hardly win in the NFL Week 5 games. Sunday game of Steelers vs Ravens and Monday game of Browns vs 49ers will finally decide that which team leads the AFC North division after NFL Week 5.

The Steelers don’t have much chance against the Ravens in the Sunday game as their starting quarterback Ben Roethlisberger is out of the entire NFL 2019 season due to injuries. Baltimore Ravens are an excellent team and Lamar Jackson is one of the best quarterbacks in NFL right now but their defense is not that strong.

The Ravens lost to the Chiefs due to Patrick Mahomes but losing at the hands of Browns raises some questions. While Mason Rudolph in Steelers is nothing compared to Jackson and the Pittsburgh team doesn’t have many chances. But if they are able to pull off a surprise, they could lead the AFC North with both teams at 2-3 record.

Cleveland Browns currently have the best odds to come out at the top position if they are able to defeat the San Francisco 49ers in Monday night football. It won’t be easy for the Browns to beat the 49ers as they have won all 3 games in 2019 NFL season and are coming out fresh after a bye in Week 4.

Think about this
1) Mayfield didn’t look to overrated today🤷🏼‍♂️
2) @Browns have had the worst possible month they could have had to start this season. They sit at 2-2 and at the top of the division with a road win🤷🏼‍♂️🤷🏼‍♂️

If the Browns can somehow beat the 49ers, they would come out at the top on AFC North regardless of who wins in the Steelers vs Ravens game. Cleveland has defeated Baltimore already and it gives precedence in case of the same number of record points. 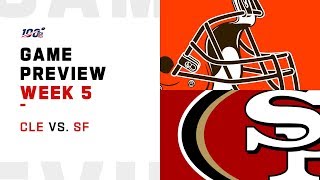