NFL Monday night is here and two of the best games will start soon. Houston Texans will take on the New Orleans Saints at their home ground in the first match which starts at 7.10 pm ESE around the evening. The second game is where Oakland Raiders will take on the Denver Broncos at 10.20 pm EST late in the night.

While fans had to miss a lot of Sunday night games because of them happening at the same time, there is no clash for tonight’s games. Here are live score and updates for the Texans vs Saints and Raiders vs Broncos game.

Houston Texans are currently the most unpredictable NFL team right now. The Texans traded out Jadeveon Clowney to the Seahawks and got Laremy Tunsil and Kenny Stills from Dolphins in a three-way exchange deal. Deshaun Watson is also looking great and can the Texans for a win.

Imagine how good he'll be now with an NFL offensive line protecting him.

But most of the odds are with the New Orleans Saints as they are a more consistent team. Drew Brees might have some problems but overall the Saints offense look good. Texans vs Saints will finally prove the worth of all the recent trade deals and their impact on NFL 2019 season.

Oakland Raiders finally got rid of the Antonio Brown where they released him after so much drama. Derek Carr might miss Brown as now he will support Tom Brady for the New England Patriots. The Raiders have to win the game to prove Brown wrong, otherwise, he would be hailed as the hero and the team as a villain.

Derek Carr was an MVP candidate with Crabtree and Cooper. He has Renrow and Tyrell Williams entering his prime and a solid oline again with Josh Jacobs. Point is WE STILL GOT THIS! #Raiders

Denver Broncos have the toughest defensive side under new coach Vic Fangio. Philip Lindsay and Joe Flacco are also ready to heat up the Broncos. Although both Raiders and Broncos are the bottom teams in the table, the rivalry would be interesting and the match sides will be equal. 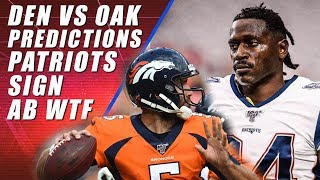