Antonio Brown has been involved in a lot of controversies recently and it’s not good for his image at all. It is why his agent and friend Drew Rosenhaus has been trying to cover things for him. Rosenhaus, who is also a regular fixture on ESPN and other sports outlet has been defending his client since the start.

Antonio Brown meets up with his agent Drew Rosenhaus, and then begins to loosen up. pic.twitter.com/whbF7JiAzj

Brown has been involved in every kind of drama from his head (helmet ban issue) to foot (frostbite). Rosenhaus says that Brown is the real victim and he’s been targeted by the media just to grab views. The agent says that the recent rape case against Brown is just a money grab, which sounds so horrific to someone who’s been through sexual abuse.

Rosenhaus has been trying to paint Brown in a positive light by saying that he has s daughter and hence he would never do something like this with a woman. The whole narrative has been taken in a totally wrong context by the sportswriters who don’t know anything about sexual abuse and rape.

Antonio Brown’s agent Drew Rosenhaus is now scheduled to appear on the noon @SportsCenter to address the sexual assault lawsuit filed yesterday against his client.

Everyone in the NFL circle says that why didn’t Britney Taylor reported about Brown on the first incident. It is not that simple, a person goes through a lot and it takes courage to take it out to the world. Brown is a father and what kind of example he’ll be set to his sons by doing such kind of things!

NFL is Concerned only about Business

The case is yet in court and we can’t judge anyone guilty until the verdict is out. NFL is a high profile game and a lot of things happens after the games. Antonio Brown isn’t quite known for his good deeds and even his stepfather said that he’s disrespectful to women.

In his first half with the #Patriots, Antonio Brown has 4 catches, one rush attempt and a TD. Tom Brady is not being shy about getting him into the mix. 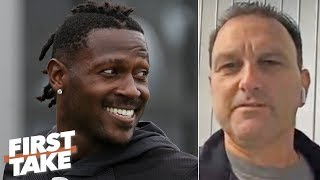