One Piece manga is about to reach near 1000 chapters and very soon it will be over. Fans of this Pirate story are looking at more ways to explore the world and One Piece games are the closest options. There have been plenty of One Piece based games for mobiles, PC, PlayStation, etc. but none of them is actually good and most of them are just loose adaptation for a quick cash grab.

But with the recent increase in popularity of One Piece characters and storyline, the video game developers might work on a brand new One Piece title very soon. The possibility of a new One Piece game release is soaring high as fan demands have grown very much

Fans of One Piece have always been asking for a world explore game where they can become a pirate and visit different places shown in the manga. Wano Island, Laugh Tale, The New World, etc. are something everyone wants to see in a One Piece game. The latest game to be released was One Piece: World Seeker where gamers can play as Monkey D. Luffy from a third-person perspective and explore the Jain Island.

But the game has received mixed reviews and people are calling it empty as there is not much action in it. It has led to fans asking for a new One Piece game and not the smaller mobile games, but a huge game on the levels of God of War and The Witcher 3.

Wishlist for the next One Piece Game

One Piece fans want the next game to have improved graphics, the storyline from the manga chapters and more characters to choose from. It would be so nice if players can eat a devil fruit and get special powers based on various One Piece characters.

Some of the fans are wishing to have One Piece game set in flashbacks where they can play as Oden, Roger, Whitebeard, etc. and find the One Piece treasure. It would be nice if the One Piece game allows us to gather our own pirate crew and sail on a world adventure mission. 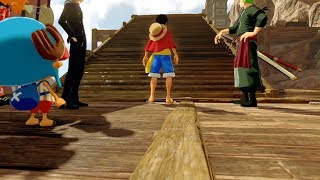