Kyle Lowry was recently signed by the Toronto Raptors for a one year, $31 million contract extension deal. While everyone would think that the Raptors signed the 33 years old point guard for his match-winning performance in the NBA finals against the Warriors, the story is something else. Kawhi Leonard, Danny Green and other core members of Raptors have left the team and they are going for a major rebuilding process.

Kyle Lowry and Raptors agree on a one-year, $31M extension, per @wojespn

Lowry won't be a free agent until July 2021 pic.twitter.com/N4J85x2Urs

Number of Larry OB's won by everyone tweeting Kyle Lowry is overpaid: 0

As per the NBA experts, Toronto has only signed Lowry as an asset and it would make the trade deal with other teams easier. The Raptors will have the full authority to bargain when they trade Kyle Lowry to the NBA teams such as Miami Heat, LA Clippers or Detroit Pistons who could make an offer for him.

Miami Heat are looking for a veteran player ever since they signed Jimmy Butler in the 2019 NBA free agency. The Heat team has high hopes for contending the NBA 2019-20 season and they are looking at every high profile player including Bradley Beal, Carmelo Anthony and Chris Paul.

Kyle Lowry is a five time NBA All-Star who can make the Miami team a winner in the weaker NBA Eastern Conference. Further, Butler is said to be a bad locker room presence and having an older player like Lowry would also improve the atmosphere off the court.

Los Angeles Clippers immediately became the top NBA team after signing Kawhi Leonard and Paul George. But those are not enough as the Clippers need more quality players which is evident from them losing the preseason games.

While they may not have real importance, it is enough for the Clippers to start looking at more options. What could be better than Kyle Lowry who has previously played with Kawhi Leonard and won an NBA title with him in the Raptors.

The Detroit Pistons might not have any big NBA superstar but they still have quality players who could win some big games. Blake Griffin and Andre Drummond are playing well together and adding a veteran like Kyle Lowry would make things easier for the Pistons.

It would also solve the rotation problem and ease some load from the shoulder of Derrick Rose. Lowry is on the trade radar of the Pistons and a deal could happen soon in the NBA trade deadline. 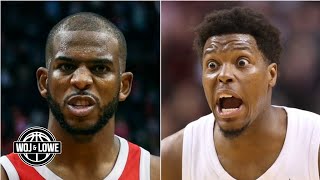