Los Angeles Lakers made no deals during the NBA trade deadline but it doesn’t mean that they are not interested in more players to strengthen their roster for the upcoming playoffs. Darren Collison could very soon get a trade deal by the Lakers and it could their best acquisition this season.

While Collison will have to choose between the Lakers and Clippers, he would prefer siding with LeBron James-Anthony Davis and fill the hole of a point guard in their roster. At the same time, Lakers have also invited JR Smith for a post-trade deadline audition and if things go right, he would be joining his former Cavaliers teammate LeBron James in NBA 2019-20 season playoffs.

Lakers and Clippers are the best teams in the NBA Western Conference and could face each other in the division finals. It is why they are making sure not to leave any chances and have freed up multiple spots in their roster for signing players after the February trade deadline. The Clippers are already having Patrick Beverley and Lou Williams at their PG position and there is not much space in there.

League sources have long believed that Darren Collison's preference is the Lakers over the Clippers. With Isaiah Thomas now going to the Clippers, it's reasonable to expect the Lakers to eventually sign Collison.

Meanwhile, Collison could fit perfectly in the Lakers as they have been rotating Rajon Rondo, Alex Caruso, and Avery Bradley and none of them had any success. Also, the Lakers have better deals to offer than Clippers and hence it makes sense for Darren Collison to join them after the deadline.

JR Smith will Audition for the Lakers

JR Smith is also one of the options that the Los Angeles Lakers are exploring post the NBA trade deadline. LeBron James and Smith have played together for Cleveland Cavaliers and share good chemistry which is why the Lakers management has given him a chance to audition a workout. If Smith can prove that he’s still fit for playing and can shoot accurately in the basket, fans could see the duo of LeBron and Smith playing for the Lakers very soon. 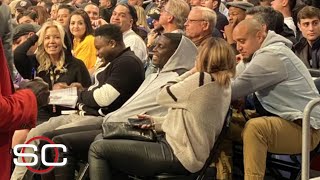