All the top star were scattered across other teams, while the Knicks spend their $70 million cap space on average players. The Knicks could have landed in Kawhi Leonard, but now they seem out of the race. Leonard will probably go to the Lakers or Clipper or maybe stay back with the Raptors. Here is an update on why the Knicks lost their chance of signing a deal with Leonard.

NBA free agency has been going very bad for the New York Knicks team as they couldn’t manage to a sign a proper deal. Kevin Durant and Kyrie Irving were expected to land in the Knicks, but they went with the Brooklyn Nets instead. Kemba Walker signed with Boston Celtics, Jimmy Butler was traded to Miami Heat and the Warriors re-signed Klay Thompson.

Leonard meeting with the Knicks Cancelled

Apparently, Kawhi Leonard was scheduled to meet the New York Knicks team heads on Wednesday, July 3. But the Knicks were scared about other players they bought from the free agency. Hence, the Knicks decided to cancel their meeting with Kawhi Leonard, worried about the risk. The Knicks thought that if the other free agents get to know about them planning to sign a deal with Leonard, they could move on.

Knicks reportedly cancelled a meeting with Kawhi Leonard in fear of missing out on other free agents, per @NYPost_Berman pic.twitter.com/PdbjJKWojR

A deal with Leonard would cost a lot, the Knicks will trade out some of their newly acquired free agents. Every player knows that the Knicks are not winning any games, but there is a lot of money from secondary sources while playing for the team. Hence they don’t want to risk that, and the New York team was aware of the fact and hence canceled meeting with Kawhi Leonard.

The problem for the Knicks team doesn’t end with that, they have again bought so many players which are of no use. New York Knicks team need to understand the fact that quality matters over quantity in NBA games. Toronto Raptors proved to everyone that you don’t need to be popular to win the NBA finals.

The Knicks have a lot to learn, they should get some talented players and believe in them. It might take some time, but in a few years, the Knicks could turn into a strong NBA team. 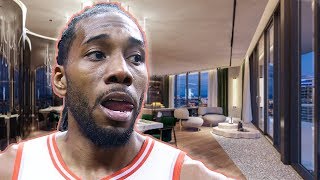