Anthony Davis made it clear that he won’t stay in the Los Angeles Lakers for long when he declined their maximum extension contract. The Lakers signed Davis in a blockbuster trade deal last year but the NBA superstar made it clear he plans to enter free agency in the Summer of 2020. Anthony Davis and LeBron James are having a good time in the Lakers and they might even win the title once NBA 2019-20 Season resumes after the Coronavirus pandemic.

But beyond that, Anthony has no plans to stay in the Lakers and will try his luck with other teams. Portland Trail Blazers is one of the teams that could make a new deal with Anthony Davis in the upcoming free agency and pair him up with Damian Lillard and CJ McCollum to form a solid power trio.

Portland Trail Blazers could easily snatch away Anthony Davis from the Lakers and they might not be able to re-sign the superstar. But to afford Davis, the Blazers need to clear the salary cap and offer him a max contract. The Trail Blazers have to give up players like Jusuf Nurkic and Trevor Ariza in the next free agency to create an opening for Anthony Davis. If we look at this realistically, Portland needs to be ready for trading every player in their team except Lillard and McCollum.

The Blazers have emerged as a dark horse team to trade for Anthony Davis, per @stevekylerNBA.

Anthony Davis, Damian Lillard and CJ McCollum can form a powerful and lethal trio that can the NBA 2021-20 title. If the Blazers enters the free agency with only Lillard and McCollum, they will have $50 million in their cap space which can be used to sign Davis and several other key players. Anthony Davis is playing with an average of 26.7 points, 9.4 rebounds, 3.1 assists, 2.4 blocks, and 1.5 steals while shooting 51.1 percent from the field and 33.5 percent from beyond the arc in the current NBA Season.

Anthony Davis in Portland Trail Blazers can help the team on both ends of the floor and boost their performance. The All-Star player can space the floor, knock down shots from beyond the arc and can also rebound while blocking shots.

Although, it would be very difficult for the Trail Blazers to afford Davis and he might not even consider their offer. In such a case, the Portland Trail Blazers can look at other trade options such as Kevin Love from Cleveland Cavaliers, Al Horford from Philadephia 76ers, Blake Griffin from Detroit Pistons, and LaMarcus Aldridge from San Antonio Spurs. 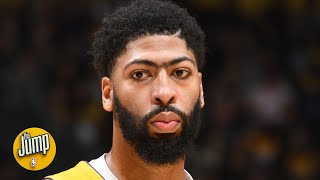