NBA trade deadline might be over but it doesn’t mean that there won’t be any deals after February 6, 2020. The offseason trade market is still open and teams with minimum financial flexibility can acquire new talents for the next round of NBA 2019-20 season. Anthony Davis, Russel Westbrook, Paul George, Kemba Walker, etc. are some of the biggest names that were traded during offseason. NBA 2020 offseason trade rumors indicate that new deals can be made for Bradley Beal, Chris Paul, and Joel Embiid.

Bradley Beal is one of the biggest NBA superstars at this moment but the poor performance of Washington Wizards and John Wall getting injured has made him a loser. The Wizards are stuck with Wall with a massive contract and he won’t be available till 2021 and they can’t afford to pay Beal more money.

Even if they offer a lucrative contract, Bradley Beal has made it clear that he wants to play for a winning team. Denver Nuggets and Miami Heat can offer a few assets to the Wizards in exchange for Beal and use him for the playoffs.

Chris Paul was traded to the Oklahoma City Thunder so that Russel Westbrook can be a part of the Houston Rockets. While the Thunder team treated him as a trade asset in the beginning, Paul turned around things and now OKC is at 32-21 record for this NBA season.

Chris Paul is averaging 17.2 points, 6.6 assists and 5.0 rebounds with an amazing shooting season. But the problem is that Oklahoma City can’t afford the $41.4 million salary for Chris in the NBA 2020-21 season and will try to trade him out to balance their salary cap.

Joel Embiid is getting trouble in Philadelphia 76ers as Ben Simmons and his duo is not performing as expected. The Sixers are about $139 million over the luxury tax threshold and they have to remove Simmons or Embiid. Philadelphia has paid too much for Ben and there is no way he will be traded out and it makes the future of Joel uncertain in the team. Even his former teammate Jimmy Butler is calling Joel Embiid to leave 76ers and join him for playing in Miami Heat. 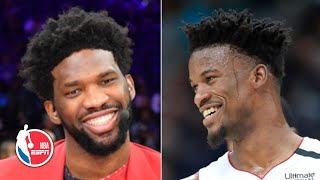