Kevin Durant has already been ruled out of Game 4 of the NBA Finals, thanks to a calf strain on his right calf. The Warriors star was unable to even take part in practice court, and Steve Kerr confirmed that after consultation with the training staff, Durant has been ruled out for Game 4 on Friday.

A long layoff for Kevin Durant

The injury layoff for Durant has been a long one- the Warriors forward has been out of action since the injury he picked up in Game 5 against the Houston Rockets in the Western Conference semifinals. He was initially expected to return midway through the finals, but it seems that his injury is worse than initially expected.

The Golden State Warrior’s head coach, Steve Kerr, feels that Durant will definitely have some role to play in Game 5 or Game 6. The Raptors currently lead the Warriors 2-1 after the Warriors first home loss on Wednesday.

Steve Kerr further added that the whole situation has been quite complex. The injury itself was certainly so, and building or predicting any timeline was tough as well. He ended saying that when Durant is fit, he will be on the court.

No new setback for Durant

Kerr did emphasize that no new setbacks had occurred in Kevin Durant’s recovery process. He even apologized for earlier misinformation regarding Durant’s recovery date, saying the nature of the injury made it hard to pin down one particular date.

Steve Kerr also revealed that second opinion has been taken with regards to Kevin Durant’s injury. And it has been a hopeful one- with the forward being cleared for action without any risk of aggravating the injury.

This follows more positive news from the Warriors, with Klay Thompson already been declared fit for Game 4. The Warriors will be looking to swing the series in their favor now.

UPDATE: It looks like he did play Game 5 but unfortunately got injured. Here’s a quick new coverage video for the same. 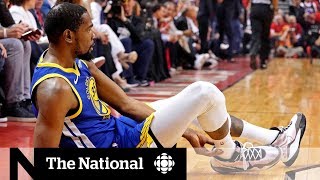