NBA 2019-20 season is going on for almost one month now and there are a lot of teams who have realized they need to make several changes in their roster. While some of the NBA star are stuck in the wrong side as the teams are performing badly and they can contribute better if they change sides. Even though the next trade period will come in February, it doesn’t mean that deals can’t be made in between. Here are the NBA deals roundup for players such as Chris Paul, Clint Capela and JJ Redick.

The New York Knicks are suffering the same problem again and again and have the worst record at 4-10 in the NBA 2019-20 season. The Knicks roster seriously lacks any experience and none of the veterans are ready to play in there despite getting huge money and popularity.

Chris Paul really a top-4 PG ever with ease

It is why the Knicks should make an offer to Chris Paul who is in his last days of fame and could use a major boost. Paul is playing amazing this season with an average of 6.1 points, 5.2 assists, 46% shooting from the field and a 44.4% shooting from the three-point line. The Oklahoma City Thunder always viewed Chris Paul as a trade asset and trading him to NY Knicks would be the logical thing to do.

Boston Celtics are somehow at the 1st position in NBA Eastern Conference with an amazing 11-2 record. Kemba Walker, Jayson Tatum, Marcus Smart and others are doing an amazing job but the Celtics know that it won’t be enough once they reach the NBA 2019-20 season playoffs.

It is why they are trying to get several high profile players and Clint Capela is one of those names on the list. The Houston Rockets might ask for future picks in exchange for Capela which the Celtics shouldn’t think much as lately the young drafts are not performing as per their rankings.

JJ Redick was signed by the New Orleans Pelicans in the hope that he could help the team in rebuilding after they gave out Anthony Davis to the Lakers for a blockbuster deal. While the Pelicans have a lot of name including Zion Williamson, Lonzo Ball, Brandon Ingram, Josh Hart, etc. the team is still not performing and have a 5-9 record.

Redick could be better in a contending and the Toronto Raptors are one of the better options. The Raptors are doing great in the NBA Western Conference and are at 4th position with 9-4 record even without Kawhi Leonard. But for the big games, the Raptors would surely need someone and JJ Redick could be the perfect player. 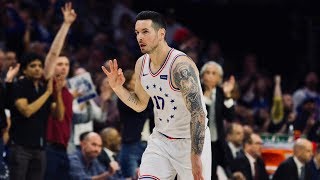