Boston Celtics team is doing great in this NBA season and is at the No. 2 seed in Eastern Conference with a 24-8 record. Ever after losing Kyrie Irving and Al Horford, the Celtics have recovered quick and have high chances of playing in the 2020 NBA Eastern Conference finals. However, they would most likely face the top team in East which is Milwaukee Bucks led by Giannis Antetokounmpo and it would be very difficult to beat them.

The Celtics would need a few big men in their roster to stop Giannis and have a shot at the NBA finals and become the champions. It is why Boston Celtics trade for a few big players like Kevin Love, Tristan Thompson, Clint Capela, Steven Adams, Karl-Anthony Towns, Myles Turner, Aaron Baynes and more to compete against the Bucks’ Giannis Antetokounmpo.

Celtics needs a Big Player in the Eastern Conference Finals

The Celtics want to contend for the NBA title and the road to finals goes through Milwaukee and their big Bucks. Boston has to get another big player to have a chance against Giannis Antetokounmpo and the rest of the Milwaukee team. Kevin Love and Tristan Thompson are available from the Cleveland Cavaliers in the 2020 NBA February trade deadline.

Clint Capela from Houston Rockets is another big man who could thrive in the Celtics environment. Steven Adams from Oklahoma City Thunder and Karl-Anthony Towns from Minnesota Timberwolves are also on their trade radar. Myles Turner of the Indiana Pacers and Aron Baynes of the Phoenix Suns are the latest names to be available before the NBA trade deadline which the Celtics could sign.

Boston Celtics have a decent collection of trade assets including young players and future draft picks but it won’t be enough to match the salaries with the big players mentioned before. The Celtics may have to offer Marcus Smart or Gordon Hayward to make the trade deal possible.

While the team needs help in frontcourt against Giannis and the Bucks, losing Marcus would weaken their defense and Hayward has also started to play extremely well. It would be a tough decision for the Boston Celtics but they have to take a risk if they want to become the next NBA champions. 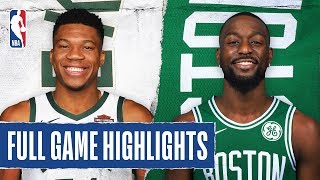