My Hero Academia Chapter 270 will reveal whether Tomura Shigaraki survives coming out of his chamber or will die without any fight. The next manga issue of Boko no Hero Academia will be delayed by one week as the manga creators will be busy in Japanese golden week celebrations. My Hero Academia 270 manga chapter will show the aftermath of the raid on the Paranormal Liberation Front.

The heroes and the villains will have a big fight and Shigaraki waking up could turn the tide of the ongoing war. Here is everything you need to know about My Hero Academia Chapter 270 release date, plot spoilers, predictions, theories, raw scans leaks and ways to read online the manga chapters.

My Hero Academia Chapter 270 will show whether Mirko and Hawks will survive their injuries or not. The two Pro-Heroes put up a good fight even though they were outnumbered by their enemies and had no backup. The heroes tried to kill Tomura Shigaraki when he was in the glass chamber but Dr. Garaki attempted to wake him up even though he is not at his full power.

It is predicted that Shigaraki will wake up in “My Hero Academia” chapter 270 at 75 percent of his powers. The doctor has given him a lot of new quirks and Shigaraki will attack the heroes once he comes back to life. My Hero Academia 270 manga chapter is the final issue in the PLF arc as a new battle between Tomura Shigaraki and the Pro-Heroes will happen next.

My Hero Academia Chapter 270 will release on Sunday, May 10 , 2020, as per VIZ’s official website. The latest manga issue of Boku no Hero Academia has been delayed for a week due to the Golden Week holiday celebrations in Japan. The raw scans for My Hero Academia 270 manga chapter will be leaked out 2-3 days prior on the internet around May 8 but it would be better to wait for the official release and English translation.

My Hero Academia, Ch. 269: The battle reaches a fevered pitch as the heroes clash with monstrous nomu! Read it FREE from the official source! https://t.co/2YdQt2u6qp pic.twitter.com/pyjxohxd1g

The latest issue of My Hero Academia manga chapter 270 can be read on VIZ media and Shueisha’s Shonen Jump official website and platforms. One should always read the manga from their official websites for free as it would help the creators and inspire them to make more interesting stories. 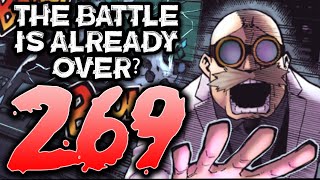