Mohammed Morsi, 67, the ousted Egyptian President, has reportedly died in a court during his trial. The report comes via Egypt’s state TV. Reports say that he blacked out during his trial and fell, following which he was taken to a hospital but was declared dead.

The Life and Death of Mohammed Morsi

Morsi, who hailed from the now outlawed group of Muslim Brotherhood, became the first President in the history of Egypt to be democratically elected. Morsi ousted the 30-year-old government of Hosni Mubarak. However, just a year after the elections, the army arrested Morsi and ousted his government over charges of espionage – these are the charges that he was facing during his trial before his death.

Sources who were present at the court said that he was presenting his case for a full 20 minutes before he suddenly became “animated” and then blacked out. Following the death of Mohammed Morsi, the trial on the case of “collaborating with the Hamas” has now been adjourned until tomorrow by the Cairo court. It wasn’t just Morsi, but 23 others who were also being tried by the court.

Tributes Start Pouring In for Morsi

Many across the world viewed Morsi with different lenses – while some hailed him as a symbol of democracy in a long-oppressed regime, others called him a zealot who was rightly ousted by the military. Nevertheless, the death of Mohammed Morsi leaves us with more questions than answers. Tributes have now begun pouring in for the former President. 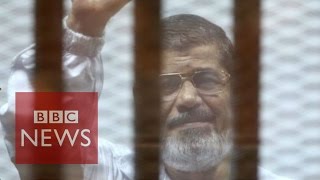