Kris Bryant will not stay with the Chicago Cubs for more time and will soon be traded off to some other MLB team. The Cubs are having a tough offseason with the hiring of a new manager and they have made some huge contracts and trading Bryant will open up some of their cap space. Bryant is no doubt one of the best starters for the Cubs who plays at the third base, but with time David Bote and Nico Hoerner are ready to take his place.

Kris Bryant is one of the most talented players to ever wear a Cubs uniform. People really need to appreciate what they have

It is the best time for the Cubs to trade the star outfielder and Atlanta Braves is one of the most suitable team for the trade deal. The Braves have the second-best record in the playoffs team and playing with Bryant would give them the required edge to win the 2019 MLB world series title.

Braves could use Kris Bryant in MLB Playoffs

The Atlanta Braves are coming off strong this MLB season and have won the NL East division title. Given the huge competition this year, the Braves did a great job by ranking at the second position in the North Line. But it will get tougher with time as teams such as Astros, Yankees and Dodgers are looking very strong.

The Braves would need as much help they can get and Kris Bryant would come in handy during the big games. Bryant was the NL MVP in 2016 MLB season and has been a consistent player ever since, signing him would make a lot of sense for the Braves.

The Cubs would most likely ask for a high price for Bryant which includes at least three players out of the top 5 from the Braves. It depends on the Atlanta management whether they agree to the demands or start looking out at other options. Atlanta Braves and Chicago Cubs could make the following exchange deal if they are really serious about trading with each other.

Would you trade Wright, Riley and Anderson for Kris Bryant? #ChopOn 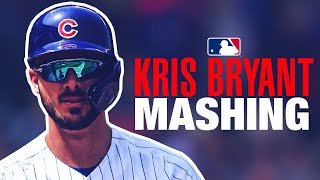