Mayweather vs Khabib is a dream match! While there have been hints of this happening and Khabib’s manager going as far as saying that Mayweather has been ‘begging’ for a match, there’s nothing on the paper officially and the parties haven’t officially met for a talk.

However, many still believe that Khabib Nurmagomedov might actually be able to face Floyd ‘The Money’ Mayweather in a boxing ring soon!

Let us take a closer look at this and see if this is going to happen:

Former UFC Middleweight Champion Michael Bisping has commented that there is very little chance that Mayweather vs Khabib, which is a match between a UFC Champion and a former boxing champion might happen. However, the strange thing is – that this has happened once in the past. While Bisping doesn’t believe that such a huge crossover is going to happen, McGregor vs Mayweather was exactly that!

Moreover, going by Khabib’s manager’s remarks, it looks more like he’s just trying to get some media attention towards his client than actually get Khabib a real match against Mayweather.

Floyd Mayweather VS Khabib Nurmagomedov would be very interesting 🍿🍿🍿

While Floyd Mayweather might not be facing Khabib Nurmagomedov, it appears that a match between Mayweather vs Pacquiao is more likely. The two have faced each other in the past and Pacquiao’s recent win over Thurman is likely to prompt Mayweather to accept his offer for one last match of his career. Mayweather vs Khabib is likely to remain fantasy booking! 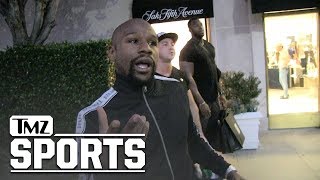