Manny Pacquiao is looking for a new fight and many boxing fans believe that Danny Garcia is the perfect opponent. The boxing champion is trying to find someone worthy enough that can give him a real challenge. Danny “Swift” Garcia” is the capable fighter that can give Manny “Pac Man” Pacquiao a run for his money.

The Filipino champ wants a strong fighter in the ring and Garcia is ready for it. Here are more details on Manny Pacquiao vs. Danny Garcia fight possibility after the coronavirus pandemic is over and the games resume.

Manny Pacquiao proved that he is still the best when he defeated Keith Thurman to won the WBA Super welterweight title last July. Since then, boxing fans are wondering who will be the next fighter to get a shot at the title match. Most of the young fighters are lining up to beat the future Hall of Famer and Danny Garcia is one of the top names in the list.

Garcia has said that Pacquiao is not much serious about the match with him but he is still ready to fight the boxing icon. It would be a perfect opponent for Pacquiao if he wants the money and pay-per-view buys, Garcia said in a podcast interview. However, Pacquiao has not even mentioned Garcia’s name and said that Mikey and Errol Spence Jr are his top 2 opponents in his last interview. Danny Garcia vs. Manny Pacquiao fight can still happen as there are no fixed game schedules due to the COVID-19 pandemic.

Manny Pacquiao is hoping to return in July as the coronavirus outbreak will be contained by then. But it means the champion has to start intense training months before an actual major fight. It means that the Pac Man has to hit the gym by May without any distractions or breaks. Pacquiao’s team has said that his next match could be set in Saudi Arabia but nothing is confirmed until sporting events are safe. 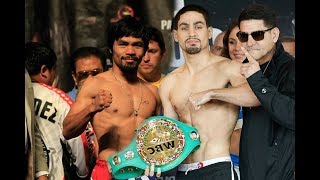