Lucifer Season 5 release date might be affected by the ongoing Coronavirus pandemic which is getting worse each day. But most of the episodes are already complete and new plot details are coming out. Lucifer Season 5 Episode 4: It Never Ends Well for the Chicken will feature some sort of noir settings and retro versions for most of the characters.

Mazikeen (Lesley-Ann Brandt) will be the main focus of the episode and Lucifer Morningstar (Tom Ellis) will sing a duet with her. Here is more information on Lucifer Season 5 plot spoilers and what can Netflix do with the premiere date amid the Coronavirus pandemic lockdown and quarantine.

Lucifer Season 5 Episode 4 is titled “It Never Ends Well for the Chicken” and it will be a noir episode featuring some sexy dancing, singing, a duet with the devil and a huge betrayal. Lesley-Ann Brandt shared a lot of new details on the plot and how it will focus on the backstory of Mazikeen aka Maze. It will be explained in Lucifer Season 5 why Maze is so loyal to Lucifer and how did he help her in hell.

The actress also teased about the ultimate betrayal and how she still carries the wound until the present day. Fans are excited about the duet between Tom and Lesley as both the actors are amazing singers as well. The noir episode in Lucifer Season 5 will feature versions of Chloe, Dr. Martin and Ella where only Lucifer, Maze and Amenadiel are in their original form.

Lucifer Season 5 filming has still not completed and it had to be halted due to the Coronavirus pandemic. Netflix has shut down productions on all their projects and the last few episodes of Lucifer Season 5 are yet not finished. It means that the season premiere of Lucifer can get delayed until the Covid-19 outbreak is not contained.

There are some rumors which state that Lucifer Season 5 could release early with the first 8 episodes and the rest of the 8 episodes will be released later when the filming resumes. Netflix has received a lot of fan demands asking to release Lucifer Season 5 early so fans stuck in the Coronavirus quarantine could have something to watch. 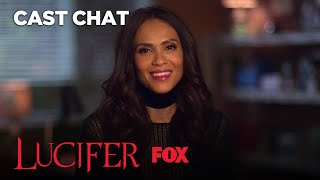