Riot Games, the developer of the popular MOBA “Leauge of Legends,” has announced a new champion update after they unveiled the Yummi the Magical Cat.

The new hero in question is Qiyana, Empress of the Elements, whose abilities are shown in a short 30-second teaser. This teaser briefly covers her weapons, lore, and abilities.

Qiyana, Empress of the Elements, takes what's rightfully hers pic.twitter.com/X7yrJovBus

Riot has posted all her abilities on their official NA Leauge of Legends website.

According to the post, her passive would be Royal Privilege, which would allow her to inflict extra damage on an enemy.

Qiyana’s Q ability is called Edge of Ixtal in which she throws her circular blade in front of her, and if an enemy is in the vicinity, the damage would be dealt. Q ability changes its behavior when used near a wall or tall grass.

Princesses W ability called Terrashape provides her with the power to enchant her weapon so that it can be used while moving. She needs to targets this ability inside a bush, on the floor or the river.

The E ability of her is called Audacity, which allows her to dash through a selected target. This move enables Qiyana to be more agile and helps her escape an attack. 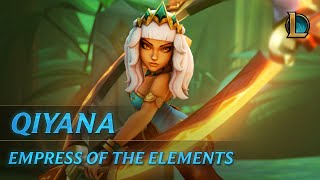 And at last her ultimate is called Supreme Display of Talent which is shockwave. This shockwave can stun enemies if it travels through bushes and rivers.

Once Qiyana joins the ranks of other champions, she will be the 145th member of the roaster. The abilities should allow her to stand up with champions like Yasuo, Riven, and Lee Sin.

Riot has not revealed the date when she will be added to the roaster.