Los Angeles Lakers vs Denver Nuggets game was amazing for so many reasons. It was the last game before the NBA All-Star break starts and also the Lakers and Nuggets are the top two teams in Western Conference. As expected, LA Lakers vs Nuggets results came out only in overtime as both the sides were scoring equal points till the last second.

But the All-Star duo of LeBron James and Anthony Davis came on top at last and lead the Lakers to an amazing 120-116 victory in a nail-biting overtime game. Here are the brief takeaways from LA Lakers vs Nuggets game and how did James-Davis pair contribute to the team winning the game.

LeBron James and Anthony Davis lead the Lakers to Victory

LeBron James played an amazing game and was draining buckets over buckets and finished with a triple-double scoring 32 points in the 42 minutes he played against the Denver Nuggets. James also contributed and helped his teammates with 14 assists and 12 rebounds and had 15-of-29 shooting with a 51.7 percentage success.

LeBron also picked up his 12th triple-double in his 17th season or later, three more than all other players in NBA history combined. pic.twitter.com/p2aLsdU7KU

It was the power duo of Anthony Davis and LeBron James that took the Lakers to victory in overtime as they scored nine points which included back to back triples by Davis where James assisted both times. Even Anthony Davis equally contributed in the LA Lakers vs Nuggets results by scoring 33 points including 10 rebounds, 2 assists, 2 steals, and 2 blocks.

Lakers are the 2nd Spot in the All-Star Break

Los Angeles Lakers are at the top spot in NBA Western Conference rankings as the 2019-20 season heads for the All-Star break. Despite having a 41-12 record, Lakers are the 2nd best team as Milwaukee Bucks are at 46-8 record in the NBA Eastern Conference. If the Lakers continue the same performance as they did against the Denver Nuggets, they would be going as No. 1 seed in playoffs and have chances of winning the conference finals and reach NBA 2019-20 finals. 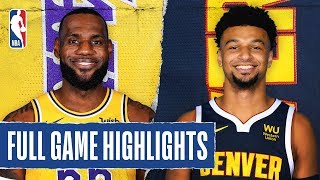