Kawhi Leonard is the biggest name in Los Angeles Clippers and they have been playing very safe with him. The Clippers have not allowed their biggest free agency trade acquisition to play both games of any of their three back-to-backs in the NBA 2019-20 season. But despite the perfect load management plan, Kawhi Leonard suffered a knee contusion in the last week game against the Houston Rockets and have missed the three games after that.

While the severity of Leonard’s injury might not be too much, any kind of hurry in bringing him back could have adverse effects. Here are latest updates on Kawhi Leonard injury, his recovery schedule and effect of the injury on the performance of Los Angeles Clippers team.

When will Kawhi Leonard Recover?

As of right now, Kawhi Leonard has been put as questionable on the injury report of the Wednesday night game between LA Clippers and Boston Celtics. While it is always considered as bad news whenever the star player in a team gets injured, coach Doc Rivers is not much worried and says that it’s a day-to-day thing.

How many more sick days and PTO does Kawhi Leonard have? He's that one co-worker who takes 18 breaks a day & gets away with it because they smoke cigarettes.

It won’t take much time for Leonard to recover as his chronic quad injury was in his right leg and the knee contusion he recently suffered is in his left leg. Still, it doesn’t mean that the Clippers will call Kawhi Leonard to play within a few days and give him full rest until he is 100 percent recovered.

The Los Angeles Clippers can’t miss out on Kawhi Leonard as he is their best performing star and would be the main player in the big matches. Leonard has an average of 26.8 points, 8.9 rebounds and 6 assists per game in the current NBA season and he’s been terrific throughout.

Kawhi Leonard is going to miss ANOTHER game tonight.

That means from October 29th until November 17th Kawhi Leonard will have played in 5 games & sat in 4 games.

The clippers are currently 7th in the Western Conference.

Paul George has now recovered and has started playing for the Clippers, but the team up with Leonard is still to happen. The Clippers are currently at a good stage and if they keep the momentum going on, it won’t affect them much in the absence of Kawhi Leonard, but he will be needed in the playoffs for sure. 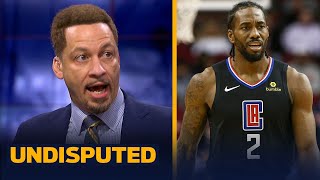