Shakira and Jennifer Lopez who are the main performers at the Super Bowl 2020 halftime show has promised that they will honor Kobe Bryant on Sunday. The two pop stars performing at Super Bowl 54 were good friends with the Lakers legend Kobe, who recently died in a helicopter crash along with his 13-year-old daughter Gianna and seven other people in the hills of California.

Super Bowl LIV game will be played between the Kansas City Chiefs and San Francisco 49ers at the Hard Rock Stadium in Miami, Florida. Shakira and Jennifer Lopez will be giving a special tribute to honor Kobe Bryant in their Super Bowl performance.

Shakira in the recent Super Bowl halftime show press conference revealed that her boyfriend, Barcelona defender Gerard Pique, has been deeply affected by the sad news and she will think of Kobe and his family during her performance on Sunday.

Jennifer Lopez and Shakira revealed that they will honor Kobe Bryant during their #SuperBowl halftime show. pic.twitter.com/hGik3XAh0r

Even Jennifer Lopez shared an emotional post on Instagram where she is giving a heartfelt tribute to Kobe Bryant and his family. Lopez is currently dating MLB great Alex Rodriguez who knew Kobe very well and was in tears hearing the news of his death. Both of them will be remembering Kobe on Sunday night and dedicate their performance to the Mamba, his family, and all the victims.

Jennifer Lopez and Shakira will make sure that Kobe Bryant is honored at the Super Bowl halftime and everyone mourns over him. Even the NFL commissioner Roger Goodell has confirmed that they have also planned to remember Kobe during the big game.

It is a tough time for everyone and they will make sure to carry on his legacy. Kobe will always be in our heart and the whole event will be dedicated to his life, J-Lo and Shakira will remember him during the Super Bowl halftime show performance. 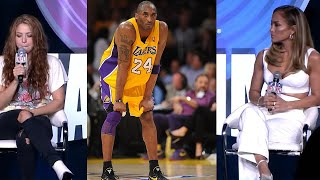