Jennifer Aniston and Brad Pitt, the most popular Hollywood couple from the nineties might be back together. Rumors are circulating on the internet that Aniston have met with Pitt’s kids and the former lovers might reignite their flame. It is common knowledge that Jennifer and Brad ended their marriage after 5 years as he was cheating on her and then married with Angelina Jolie which lasted almost a decade.

We can dream, right?

While we’re all going gaga over the moment Jennifer Aniston reacted so sweetly to Brad Pitt’s Golden Globes win, the pair have apparently pulled the ‘just frie… pic.twitter.com/LHbB3nKhqi

Reports are claiming that Jen has met with her ex’s children Shiloh, Knox, and Vivienne and they are planning to live together as a family. It is also possible that Jennifer Aniston is pregnant with Brad Pitt’s child and a marriage is on the cards to start a family.

The insider sources are claiming that Brad and Jennifer have been spending the holidays together and their reunion news is only known to close friends and families. The former spouses have decided that their kids needs both parents and after Aniston divorced Justin Theroux, she also feels lonely and needs a supporting family.

While Gossip Cop has debunked all the rumors that Jen and Brad are getting married soon, the chances of them getting back together are still very high. Aniston and Pitt are on very good terms and it won’t be a surprise if they plan a future marriage.

Every rumor about Jennifer Aniston and Brad Pitt getting back together started after Jen was seen with an alleged baby bump during the movie premiere of Netflix’s Murder Mystery. The 50-year-old actress was seen walking very slowly with hands on her tummy and her pregnancy rumors started soon.

It was also supported by the fact that Pitt and Aninston were in Paris during the same time and a possible reunion was on the cards. However, Jen and Brad were never seen together and it was also revealed that Jennifer was not pregnant at all, nor even with Pitt’s child. 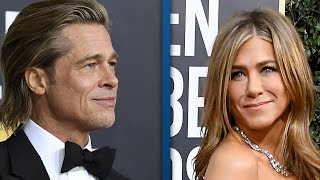