Jack Ryan Season 3 will start filming soon and with that new plot spoilers about the Amazon prime original series are coming out. It is expected that James Greer (Wendell Pierce) will have a different kind of role in the third season and won’t appear as a series regular.

Jack Ryan (Season 2) is a great political action thriller. A bit of a convoluted storyline but I love John Krasinski in this role. pic.twitter.com/zUsaWyLH7r

John Krasinski as Jack Ryan will get new partners and James Greer might be promoted as a CIA officer where he will have to sit behind a desk and work inside a office. Here are more details on Jack Ryan Season 3 release date, plot spoilers, scripts, theories and new characters.

Jack Ryan Season 3 cast list has not been announced yet and there are several conflicting reports on whether Wendell Pierce is coming back or not. The character of James Greer went through a lot of trouble in the last season of Jack Ryan where he was captured by terrorists and tortured. It took a physical and mental toll on Greer’s health and he won’t be returning for field missions anymore in season 3 of Jack Ryan.

But the character of James Greer has been one of the main foundations in the “Ryanverse” created by Tom Clancy in his books. James told Jack that “It’s been a hell of a run, but it’s over. Time to move on” after what happened in Venezuela. Although, it doesn’t mean that we won’t be seeing Wendell Pierce in “Jack Ryan” Season 3 as he will be promoted to a higher position that doesn’t require fieldwork. Tom Clancy’s Jack Ryan books follow the same as James Greer is promoted to a high ranking CIA officer and helps Jack while sitting in the office.

Jack Ryan Season 3 release date for 2020 seems a bit difficult as the show has yet not started filming. Vaun Wilmott has been hired as the new showrunner who is working on the script with John Krasinski. Based on the previous production schedule and the quality of the series, it would take easily a year more to complete. Fans can expect Jack Ryan Season 3 to stream on Amazon Prime video in the year 2021 at the earliest. 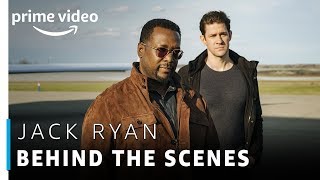