Jack Ryan Season 3 release date could get delayed or even the series could be canceled over the COVID-19 pandemic. Amazon spends a lot of money on the original prime series based on Tom Clancy’s books. The lead star of the show, John Krasinski who portrays the character of CIA analyst Jack Ryan has won the hearts of many viewers.

Can we get a season 3 of Tom Clancy's Jack Ryan?

Even though critics had mixed opinions on Jack Ryan Season 2, fans are eagerly waiting for the third season. But based on the recent events, Jack Ryan Season 3 could be canceled or the premiere date could get delayed as John Krasinski is busy in several other projects following the coronavirus lockdown.

Jack Ryan Season 3 filming was supposed to start in a few months but the coronavirus outbreak has forced every studio to shut down production. Even though inside works such as scriptwriting could have been continued for the Jack Ryan series, the creators have even abandoned that.

John Krasinski himself is involved with the script but is now busy in other projects. Krasinski has launched a new YouTube channel called Some Good News and his Office co-star Steve Carell was his first guess. The show features a primetime news format and tries to make the viewers feel better when they are locked down in their houses until the Coronavirus threat is over.

Alright let’s do this!

Send me your good news at @somegoodnews ! pic.twitter.com/6PIr8iaWCd

It means Jack Ryan Season 3 has been put on hold and the release date will surely be delayed now. John Krasinski and Emily Blunt’s upcoming movie, “A Quiet Place 2” has also been postponed over the coronavirus pandemic. It will further cause more delays in “Jack Ryan” Season 3 premiere date or the TV series can be canceled altogether.

Jack Ryan Season 3 will feature some new cast members and the role of James Greer will be changed. The senior agent will be promoted to office work and Mike November will be the new partner of Jack on field missions. There are some theories that Jack Ryan Season 3 plot could explore Russia or other such countries and it will have more intense action sequences. There is no way Season 3 of Jack Ryan comes out in 2020, it could premiere around the end of 2021. 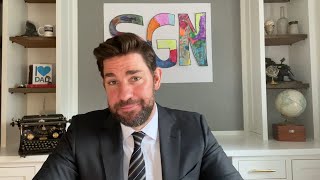