Tesla’s Model 3 has been winning quite a few admirers with its performances in drag races. The latest of these races say the car beat two sturdy, compact cars, the BMW M3 and Audi RS4 Avant.

Tesla Model 3 beats BMW and Audi in a drag race

This drag race was held in three categories- a wagon, an EV, and a sedan. The goal was to select the best speedster from each of the three, with all cars from a category having similar engine capacities.

CarWow released the footage of the drag race, which had three fast, compact cars- the BMW M3, the Audi RS4 Avant, and the Tesla Model 3. 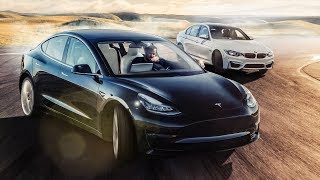 Knowing the specs behind each car is essential in understanding the importance of the winner. The Audi RS4 sports a twin-turbo V6 engine with a 2.9-liter capacity. The engine can deliver power at 444 HP and 600 Newton-meter torque. And of course, under the Quattro all-wheel-drive system, the power is delivered to all four wheels. The car itself weighs around 1,790 kg.

It is the quick but silent acceleration of the Tesla that makes it a formidable opponent, admirers say.

Performance of Model 3 in the absence of ludicrous mode

The Model 3 Performance version has no ‘Ludicrous mode’. Hence, when the car squared up to the Tesla Model X (which HAS ludicrous mode) for 1/4 mile drag races and beat it, it made for some quite jaw-dropping scenes. Another incredible result was the Model 3 beating the Camaro SS by 1.093 seconds in a 1/4 mile race. A full second’s difference in a drag race is just insane!