As per the reports of the Wall Street Journal, Apple has revealed the iPhone 2019 specs, the release date and changes to expect. With the declining sales and loss to Apple in recent business, everybody has their hopes high for this year’s iPhone.

The iPhone XR, XS, and XS Max had just been launched. But plans to launch new design and features have been disclosed. Below are the details.

Apple has been using the LCD display for its phones for a long time. Now to step into the category of OLED display market, the expensive iPhone would be incorporating this feature.

iPhone 2019 flagships XS and XS Max Sport would be having the OLED display feature but XR Sport would still be carrying the Liquid Retina LCD. Apple might be late for it but using this spec on their iPhones but it’s never too late.

The South Korean news source, ET News falsely claimed that OLED iPhone spec would be carried for “all 3 models”. But sooner an analyst for KGI Securities claimed that LCD screens will be present in the list of iPhone 2019 features.

As per recent announcement, Wall Street Journal has confirmed the OLED display as one of the iPhone 2019 feature list. But the release date is still not final nor even rumored.

But in a recent article by the Wall Street Journal clearly told that two flagships would be carrying dual lens setup and the largest would be having triple camera setup.

Economic News Daily also declared that the triple camera spec would be having 12 megapixels camera each. Which means that better TrueDepth spec for front-facing cameras. Claims also depicted that iPhone 2019 camera would incorporate stereoscopic imaging.

This means iPhone 2019 would be capable of capturing scenes and objects in different angles and then use those images to generate a 3-D imaging effect. This spec would be extravagant.

This news is similar to an earlier rumor by analyst Lu Jialin from Deutsche Securities, which told us that iPhone 2019 would use two stereoscopic lens and one lens having telephoto capability. This would result in capturing of 3-d image and true reality feature. But neither Apple nor any other source has declared any iPhone 2019 release date.

In the Worldwide Developer Conference, Apple introduced its ARKit 2.0 as a section of iOS 12 this year. This means that Apple is working on its ARKit and new update also delivers multiple features.

Improved picture tracking, realistic imaging and sustenance to 3D objects are key features of it.

iPhone 2019 feature list will also include AR game mode, multiple user virtual mode and augmentation to multi-user. With triple lens technology it would impressive to look for future of ARKit.

Will there be a change in iPhone 2019 design?

In 2018, we experienced the notch display of screens in iPhone series. But in last year Honor View 20 and Samsung A8s with punch hole technology. To compete with the technology it is rumored iPhone 2019 might be having a similar design. 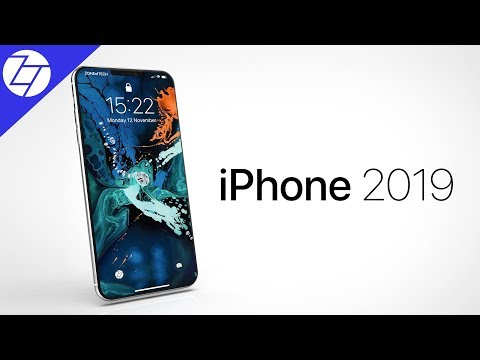 iPhone also filed a Patent in relation to using ceramic for body of its phones which would be manufactured in multiple colors. It would definitely alter future of Apple.

A patent showed that iPhone was having different colored bars at top and bottom. It also means that Apple logo could be in different colors from the body. The iPhone 2019 release date has still not been decided by Apple nor any other source has declared.

3D Touch is supposed to be removed from iPhone 2019

After every new flagship declaration, it is always guessed that new features and tech would be included in the phone. But Apple also steps forward in removal of features which had turned to be useless. And this time it would be 3D touch.

In earlier iPhone specs, 3D touch was a feature introduced and marketed. But it offered nothing interesting. And customer didn’t appreciate the feature and so Apple is taking this step.

By the removal of this useless feature, it is showing some bold step of the company.

Apple should be drooping 3D touch capability as soon as in 2019.

An analyst from Barclays also suggested the same thought of removal of the feature in near future. In 2018 when iPhone launched it series, XR was the first ever flagship not having the 3D touch.

Apple may be removing the feature in its entry-level segment but it is definite that this feature would be removed in 2019.