Game of Thrones season 8 has been quite interesting till now and it has managed to keep us at the edge of our seats.

The third episode finally witnessed the battle of Winterfell and it shattered all the records. There were a lot of twists and turns and when you finally move on from the battle, you kind of start wondering about the actual story line. The Night King is gone; in the middle of the eighth season. So, what’s going to happen now?

The show runners’ take on Game of Thrones season 8

So, an interesting thing happened when the show runners of Game of Thrones made an appearance on Jimmy Kimmel Live. Dan Weiss and David Benioff have opened up multiple possibilities for Game of Thrones season 8. You can watch the video and take the hint yourself. 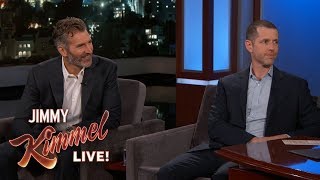 As we had seen in the third episode, Arya stabbed the Night King and the entire army of the dead turned into dust. But, Benioff and Weiss’ answers on Jimmy Kimmel Live have led us to believe that it might not have been the end of them.

So, Kimmel asked them three questions and we are going to look at them now.

What were their answers?

The showrunners answered with ‘possibly’ for the first two questions. But, for the third question, they said, “Yeah, we won’t answer that question.”

Woah! That’s brand new information. After all, we did see the entire army getting wiped out. But, to be honest the show’s Night King does not have a counterpart in the actual books. So, it means that the show runners can play around with the characters and bend the rules.

A possible theory about the dead

In this situation, The Hollywood Reporter has tried to reconcile with a theory. They have said that the white walkers that we saw biting the dust were the ones that the Night King had brought back to life. But, we need to go back to the fourth episode of the first season of Game of Thrones to gain some more insight. The episode was titled Oathkeeper and we saw one of the white walkers handing over a baby to the Night King. The Night King touched the child’s cheek with his nail and it’s eyes turn blue. So, that is definitely not something similar to bringing the dead back to life. Because the baby was already alive. It was turned into something else.

But, all that is mere speculation and theory. But, Game of Thrones has the reputation of twisting things at the last moment and bringing out something completely different. So, let’s hope that Dany and the others don’t have to face any more of the dead in addition to Cersei and Euron.