Friends Reunion Special episode at HBO Max is finally a go after getting almost canceled due to high salary demands from the cast members. The upcoming streaming platform from HBO will have the entire library of Friends (Season 1 to Season 10) from April 2020 on its launch. To make it more popular, there was a plan to have an unscripted episode where the Friends cast will reunite and fans will get to see their present lives after so many years the story ended.

While the reunion special was about to get canceled, the cast and producers have finally settled on a contract and we could expect filming to start soon. Here is everything you need to know about the ‘Friends Reunion Special’ episode release date, cast, contract negotiations, plot and HBO Max premiere.

Jennifer Aniston, Courteney Cox, Lisa Kudrow, David Schwimmer, Matt LeBlanc and Matthew Perry have finally reached an agreement with Warner Bros. TV and the reunion special episode for Friends is now officially in progress. Each of the cast members will be paid around $3 million to $4 million salary for appearing in the special episode.

The original cast of 'FRIENDS' will return for a 1-hour reunion special on the upcoming HBO Max streaming service.

It means that the total amount spent on Friends special cast is $20 million, which is something similar Netflix provides to famous comedians such as Dave Chappelle, Chris Rock, Ellen DeGeneres and Amy Schumer for hourlong specials.

Friends Special Reunion episode plot is not finalized yet but it will most probably be like a regular episode from the original series with title, “The One where they reunite” or something and showcase their present-day lives. Rachel, Ross, Monica, Chandler, Joey, and Phoebe will be having a conversation in the Central Perk cafe for a 1-hour episode and many of the things that happened after the show ended will be teased.

Friends Reunion Special will premiere the same day as the HBO Max streaming service is launched. It is announced that HBO Max will launch in May 2020 and a fixed date will be revealed soon. Hence, fans would be obliged to take HBO Max subscription from the first day as Friends reunion episode special will release in early May 2020 on the service. 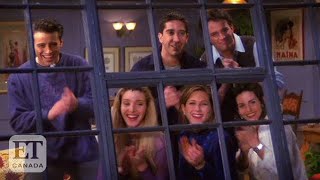