Fantasy football is a game of uncertainty and any player can make or break your fantasy team. Odell Beckham Jr. was a favorite name of many fans but his performance in the Titans Vs Cleveland Browns was a total let down. NFL Week 2 is much more important as the base odds for every team and player has been set now.

There are some names who can totally jump in their rankings whole others can make you go broke. Here are the top 10 players you should include in your fantasy football rankings for NFL 2019 season.

Evan Engram can easily lead the NFL in terms of taking up receptions. All the other tight ends are either suspended or going through an injury and hence the competition is already thin. Golden Tate, Sterling Shepard and Cody Latimer will miss the NFL Week 2 games and it makes Engram the top name to score points. Tre’Davious White is a great cornerback in the team of Buffalo Bills. Engram from the Giants will have to look for another opening in the game.

Who to start this week. Evan Engram against Buffalo or Delanie Walker against Indy? #FantasyDecisions #FantasyFootball

Malcolm Brown suffered in the last game due to average play from Todd Gurley but that doesn’t mean his numbers are low. The running back will do his best to support Gurley as the Los Angeles Rams take on the New Orleans Saints. The Saints are amazing against the run and Brown will have to make full efforts to pass through. There are high chances that Malcolm is held under just 3 fantasy points.

Cooper Kupp can easily finish in the top 5 receivers of the Week 2 NFL games. The New Orleans Saints can stop the running backs but they are kind of useless against the wide receivers as seen from the Texans game. Jared Goff will need him the most and Kupp will be the one to take most of the heat from the defensive line of Saints.

Should I trade cooper Kupp for Carson Wentz?…need help at qb because mine is cam newton @MyFantasyLeague

Even though the Miami Dolphins might not win a single game, it doesn’t mean that their players can’t rake up fantasy points. Preston Williams can easily pass for more than 35 points in the game against New England Patriots. The Dolphins offense is not any great but Williams is a talented rookie who would make a contribution to his numbers and making the fantasy football owners rich. When the NFL 2019 season is over, Williams may end up in the top 30 receivers for sure.

It's Preston Williams time. You buying or selling? 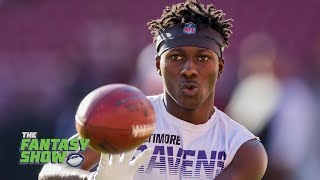