Recently, there have been talks about the retirement of host Ellen DeGeneres. There are some stories as well as how she may pass on her position to someone else. But, we have official proofs that these stories are nothing but a fake.

The talk show hosted by Ellen DeGeneres got a renewal for another three years recently. Ellen DeGeneres shared this news via Twitter and she even said that the audience would have to stick with her for a little longer. Well, the viewers don’t mind this at all. Ellen DeGeneres has been on TV for more than two decades now and her fans totally love watching her.

Doing this show has been the ride of my life. Sometimes in a relationship, you need to take a break. But I don’t. You’re stuck with me. Because I just signed for three more years.

Ellen DeGeneres is the reason why the fans watch the show in the first place. Someone replacing her in her talk show would be equivalent to replacing Oprah in “Oprah”.

Doing this show has been the ride of my life. pic.twitter.com/Mytkjxj4xa

The viewers would never want that to happen. If she decides to retire, it would be the end of her talk show. No one can ever replace her. So if that ever happens, it would be better to start another talk show with another host.

But the fans need not worry for now as we still have more time to spend with the great host. And if you hear more stories about her retirement, you already know what to do with them. 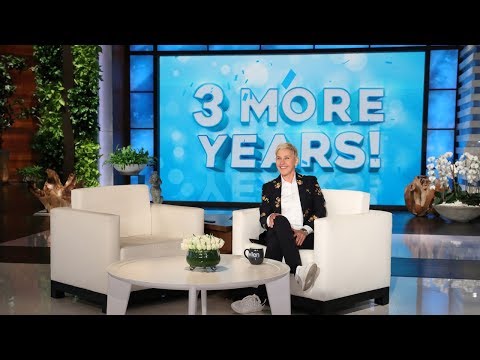