Dragon Ball Heroes Episode 20 is coming soon and with that first season of the anime will end. Fans of the anime were very excited to see the Super Saiyan Blue Gogeta vs Hearts, the Godslayer finale fight and it was as epic as it could get. Gogeta, who is the fusion of Goku and Vegeta was able to come out victorious in the super fight during Dragon Ball Heroes last episode titled “Decisive Battle! Time Patrol vs. Dark King!” and as per the name, it decided the fate of the universe. The winner was able to save earth from the big asteroid when Gogeta used a special move to deflect the big chunk of the rock.

Note: This is not the beginning of Season 2 (or Story arc 3 of PR Anime)
This is ONLY a Special Episode for the Dark Demon Realm Mission Climax.

However, DBSChronicles the makers of the anime cleared that Dragon Ball Heroes Season 1 Episode 20 is neither the season finale or the start of the second season. Episode 20 of Dragon Ball Heroes will act as a special finale episode of “Dark Demon Realm Mission” which will show the climax of Dark Empire and the Time Patrol.

Gogeta who is the superfusion of Goku and Vegeta along with the help of Piccolo, Trunks, Android, Hit, Jiren, and other warriors were able to save the Universe during the latest episode of Dragon Ball Heroes. It makes sense as the storyline of Dragon Ball Heroes Episode 20 can’t be continued in a separate way if the story went on a cliffhanger.

GOD DAMN IT DRAGON BALL HEROES. I WANT TO HATE YOU SO MUCH BUT THIS IS SO FUCKING COOL. JESUS FUCKING FUCK pic.twitter.com/gFOpqKMVaX

Hearts Godslayer, who could have destroyed the entire Z fighter was defeated by Gogeta and the energy released was tremendous. Even the heroes were not sure they would be able to defeat the villains and put them in their place before Dragon Ball Heroes 20th episode.

Dragon Ball Heroes Episode 20 doesn’t have a fixed release date as of now but reports are saying that it would air on February 20, 2020. As for the Dragon Ball Heroes Season 2, it has been rumored to premiere between the months of May and June this year. The upcoming episode of DBH will finally conclude the Dark Demon Realm Mission storyline from the games. 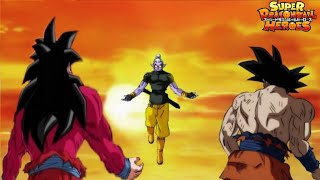