Dr. Stone Episode 25 will be next in the anime series to release for which fans are waiting eagerly. While the first season of the show ended on episode 24, the next episode will be a part of Dr. Stone Season 2.

We can call it Doctor Stone Episode 25 or Doctor Stone Season 2 Episode 1, which will be taking the story forward and resolving the conflicts. Here are more details on the possibility of Dr. Stone season 2 release date and plot details for episode 25.

Dr. Stone’s latest episode ended with Senku building a communication device which they called cellphone. Although it was too difficult to create, the villagers helped him and made it possible. Everyone in the previous episodes of Dr. Stone season 1 collected the required materials and spent months to create the device after holding it in their hands.

The cellphone will prove very important to them as it will help them in defeating Tsukasa and get free from his grasp and threat he presents. Dr. Stone episode 24 was the last episode in season 1 but the main fight with Tsukasa is yet to happen, which means there will be a season 2 for sure to continue the story further. Episode 24 of Dr. Stone ended with “Voices over Infinite Distance” where Chrome and the villagers built two cellphones but they are yet to test it if it works.

Dr. Stone season 2 will premiere as Episode 25 will resolve the major conflicts from the last season. Fans will finally get to see whether the cellphone works and how Senku and the villagers defeat Tsukasa and his army. Dr. Stone episode 25 will carry over the “Stone Wars” arc from the manga books.

We are 10 BILLION PERCENT certain it's Senku's birthday today. 🎈💡

It is also reported that Senku will meet his old friends, Taiju and Yuzuriha, and the three friends will solve together the mystery of petrification. The release date of Dr. Stone episode 25 is speculated to be around July as even the first season premiered back then. 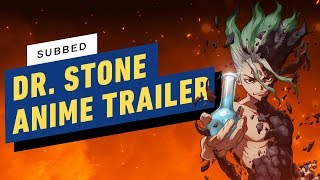